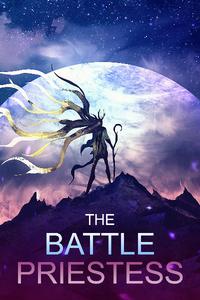 For decades the kingdom of Nephyria has been at war against cosmic creatures that threaten to devour all life. They cannot fight much longer. With the last of their defenses collapsing, the king decrees that 500 citizens from families across the land be drafted and blessed with heavenly powers in preparation for the final battle.
When Zerena's husband receives the order, he considers fleeing, but disbodience means death. Remembering her father's bravery and ultimate sacrifice, she decides to take up the mantle and fight for the kingdom—and for the future of her son.
After a tearful farewell to her family, she journeys to the capital to begin training. There, she receives a rare [Blessing] that allows her to enter into [Contracts] with mystical deities. Her peers see her as a liability on the battlefield, but her powers may just hold the key to winning the war.

No release schedule yet. Probably Tue/Thu/Sat at random times for now.
Shorter chapters at the start, but will eventually average around 2000 words per chapter.
Please rate and follow for updates. Thanks for reading!