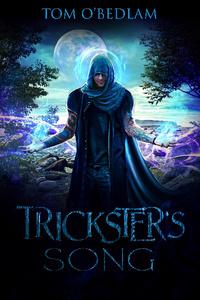 After a drunken college ritual goes very wrong (or very right), Robin wakes up, naked, in a world of dark priests, angry kobolds, and Lost Gods. The priest wants to crush his will. The kobolds want to catch and eat him. The Lost God, well, it's not yet clear exactly what he wants. None of them care what Robin wants.
Robin would like to explore this new world without all the messy complications, thanks. He finally has a bit of real magic at his fingertips, but the monsters on every side won't let him relax long enough to enjoy it! The only tools he has to survive are his wits, the strange messages that keep flashing before his eyes, and a newly-discovered talent for illusions. It’s nothing game-breaking…or is it?

This fiction features a gay/bi male protagonist.
Robin will progress through various levels of power at a steady pace. Progression will be at a moderate pace. The rise to power is far from meteoric.
Trickster's Song will update once a day through 31 October 2021. Schedule after that will depend on how much backlog I have left!
Expect Updates to usually post between 16.30 and 17.00 GMT (London Time)