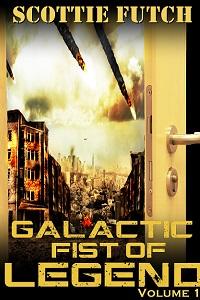 In the year 2018 a bright star appeared near Earth. Humanity as a whole was briefly introduced to a race of beings far beyond their understanding. During that brief interaction a proclamation was made, Defeat the Grand Emissary or become the eternal slaves of those who had arrived at Earth.

The only chance for victory was for people all across the globe to make a choice. When prompted to become a champion and a play a bizarre game of life or death they could choose yes or no. Those who chose no, went about their lives afterward. All memory of the event was lost despite the fact that their very existence as a free species hung by a single thread.

Will those who said yes manage to survive the horror of the game and become strong enough to defeat the Grand Emissary. Can one of them become... The Galactic Fist of Legend.

Notes: This story will contain graphic violence, stupid humor, nudity, sexiness, and maybe I'll give the main character a pet cat or something. I don't know yet. Still, you need to be pretty mature to properly take care of a pet.

Notes2: This story is my answer to stories such as Gantz, Terror Infinity, Battle Royale, Btoom!, and strangely enough... Captain N: The Video Game Master. It is an original story, but it does seek to give a similar vibe to some of those tales of legend. However, it is not meant to be an overly serious tale as I have decided that the new stories that I release in the coming year will be mostly comedies.