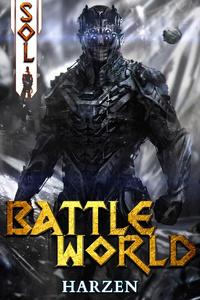 The overlords came and enslaved humanity just like hundreds of other species across the galaxy. Humans were given gifts beyond their wildest dreams, but those gifts came at a price. Every year, a new group of randomly selected humans would have to take part in the Constellation Games that take place on a gigantic planet the Overlords prepared for that very purpose. Humanity lost its latest tournament and is now at the very bottom of the ladder. The next time they lose will be there last.
In comes Clint, a young man with too much weight on his shoulders. His sister has the one disease the aliens will not cure, his father is a hard-ass who threw him out when he hit 18, and now he has murdered two thugs who wanted to hurt his sister. Could anything else go wrong? Yes, it could. And it did when he was chosen to participate in the games for Earth's very survival.
The story contains the usual gamelit elements of stat progression, skill progression, an interesting take on king of the hill, capture the flag, and open world PVP/PK. Big boss raids, intrigue and politics. Overlord assholes, even servant alien assholes dealing in podcasts on 'how to make a human fail or die in one easy step'.
After the first 5 chapters, I will be releasing a chapter every two/three days until the whole first arc has been covered.