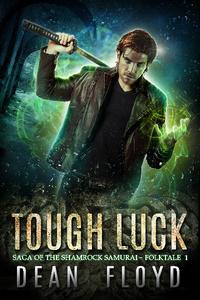 How many shotgun blasts does it take to kill a Banshee?
Sean’s a martial arts enthusiast who just discovered his Luck magic.
Will his new powers be enough to combat the slew of celtic monsters that cropped up to terrorize his city?
He’ll unload a whole barrel of Luck on these paranormal pests, cruising in his ‘69 Fastback, slaying shades after dark.
You’ll ride shotgun with Sean as he battles Banshees, clashes with Leprechauns, strives against Vampires, and defends his own against Celtic Demigods.

THIS COMPLETE SERIES will be released in its entirety. Full transparency: this series is published on Amazon, but never found it's intended audience. I'm happy to offer the complete story here for free in hopes that this story will finally find and entertain the intended audience. Enjoy!

Readers say...
“This series is kind of wild.”_David Simpson, author of the Zombie Road series.
“Loved the plot twists and the action.”
“I found the concept of magic/luck to be original and refreshing... PLENTY of action.”
“Cool blend of geek culture and Gaelic mythology in a modern paranormal setting.”
“Hang on till the end. There’s a wild twist I didn’t see coming.”