The nine tails of Alchemy 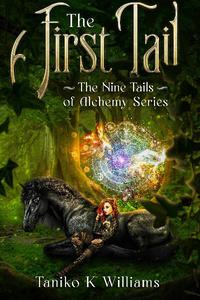 The year is 2375, and the world has been drained of most of its natural resources, in order to preserve their dying planet the government puts into action the digital life initiative. Those deemed of low economic value, are stripped of their physical bodies, leaving them to become digital beings who live out their lives in the virtual cities.

Top of her class, and seemingly on the fast track to university, Kadia is horrified to find herself issued with a notice of digitalization. In an instance, her life begins to fall apart around her, with the knowledge that her family had sacrificed her in exchange for her half brother.

Kadia wasn’t someone who had any interest in the virtual worlds, unlike her brother who spent his days lazying about in a VR capsule, she was busying studying and preparing for her future as a pharmaceutical scientist. After her digitalization, Kadia is reborn into the virtual world Kaledon the newest and most realistic fantasy world on the market, where she finds her dreams and passion rekindled when she picks up a mortar and pestle.