Blackout : The Obsidian Mage Book One 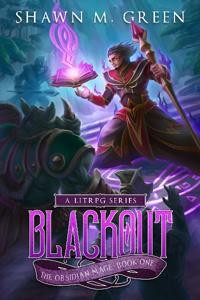 When Death takes an interest in you, you know you royally screwed up!Grey Alasdair is having one hell of a rough morning.He is abruptly awoken from a blissful sleep to find himself in a world much different than his own. A world teeming with magic and adventures beyond his wildest dreams. Too bad Grey can’t remember his dreams or even his past, let alone how he came to be in this new world. The only thing he knows for certain is that this world is not his.If Grey is ever going to find his way home and figure out just how he came to be in this strange place, he must learn to use his newfound abilities to survive against the never-ending bad guys out to get him. From insane mages trying to abduct him to magical creatures attacking him seemingly for no good reason, even the stalkerish Death who won’t leave him alone -yeah that’s right capital “D”- Grey just can’t seem to catch a break.Join Grey, along with the family man Polo and the beautiful Mage Wren, as they venture across the expanse of Calkan in the hopes of finding the answers he so desperately seeks.Warning: Contains adult language, violence, gore, and a medley of other things most sane people would probably want to avoid.