Tannhauser and the Final Seal (A Sword and Sorcery story) 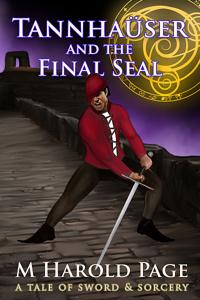 It's ten years since Tannhauser, a lethal German swordsman, escaped the embraces of the Goddess Venus and found himself lost in sword and sorcery multiverse.
Now, jaded and cynical, Tannhauser wanders the Many Worlds, scraping a living as a mercenary and fencing master, looking for a way to return. However, when his young fencing students vow to defend their city against an evil sorcerer, he must battle to keep them alive, or else lose himself to grief and guilt.
There's also a charismatic priestess and revolutionary to stop, or to aid... perhaps even love. And maybe, if he saves the city, he'll win a clue to the location of Venusberg, though even he does not know whether his quest is about getting home, or a returning to the timeless embraces of the Goddess.