Dawn of the Nexus (Base-building LitRPG) 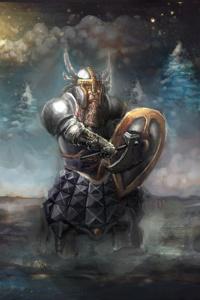 Meet Peter ‘Horn’ Kowalsky – The champion! The prodigy! The winner of the ToN master league in 2032!
Peter played games his whole life, finally reaching the top. In the final tournament in a worldwide RTS-RPG blockbuster, he won the Global event. His victory secured him a spot in a pre-release of a new game, Dawn of the Nexus. THE VRMMORPG-RTS masterpiece that the whole world was waiting for.
Join him on his journey into a new unexplored world. A realm which the pre-release players will build up from scratch. Leading his clan of dwarven warriors and crafters, he has limited time to prepare before the wave of players will change everything.

He'll need trusted champions and allies, as the danger and competition will be close by. This will be the actual test of his determination, cunning, and planning skills and a lot of sweat and virtual blood. Will he find himself in the new world? Will he again reach the top? Will it even be worth it?

Welcome!
If you're a fan of: