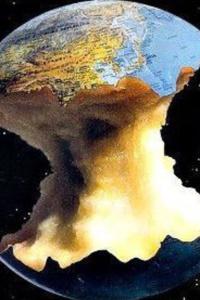 The Biter is a monster of unimaginable proportions, a being of hunger so vast that stars are snuffed out with a lick, capable of swallowing planets in a bite or two. For centuries the beast has feasted on planet after planet with only a pitiable attempt to combat it by an alliance of space-age planets.
Earth was devoured centuries ago with barely a fight, and now Peri, a human who has never even seen an Earth-borne blade of grass, survives within the Biter's enormous mouth among the rubble and ruin of a dozen different planets worth of civilizations stuck between the Biter's teeth. Alien creatures roam the endless plains of its tongue and dwell in the saliva filled gulch between its gums.
Sentient species eke out a living here in spite of the constant threats, unaware of the fevered panic of those yet to be eaten. Soon, the last planet left in the inter-planetary alliance will be devoured. It is a world called Oog, and it's inhabitants are a people made of candy who wield knowledge advanced enough to alter the flows of all energy and worship a mechanical god that dwells in the center of their sugary world.
None of that matters to the Biter. It has not been slowed. It has not even noticed the countless attempts to kill it. Nukes fizzle against its fur. Tungsten spikes fail to pierce any real distance into its flesh. Sun flares and plasma ruptures are nothing but a warm lash of spring air to it. Plague bombs failed to achieve even the slightest form of indegestion.

Peri knows none of this. He is a survivor, one struggling man among the remnants of humanity.
He will need to be more than that if he is to stay alive in the storm to come.