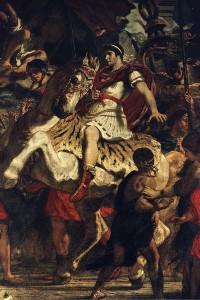 In the Imperial Roman province of Germania Inferior, Marius, the son of the local governor, leads a life with goals to join the Senate and eventually become a governor of his own province, living in a world where emotions themselves impact the very world around people.
Joy, anger, love and hate. All of these things leave imprints in the air, an Emotional Atomsphere, that build and flow and disapate much like air does.
When his father suddenly vanishes, and he is left alone to fight off the barbarians invading his lands and to deal with the politcal backstabbing of the Roman Senate, Marius must struggle to maintain the province, his duty to the Empire, and the well-being of his people, all without losing his own mind to the turbulent emotions that surround him.