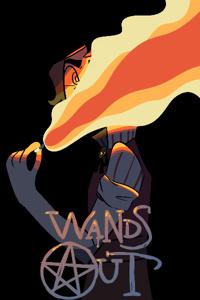 Welcome to the Appalachia School of Magic and Arcana, the fifth best wizarding school in the US! (Note: all vaping, magic or otherwise, is prohibited on campus.)
Hester was sent home from school when she was ten years old because she kept trying to light matches with her mind. And then her house exploded. And then she turned out to be a fire wizard. But something doesn't quite add up, and she suspects that someone else had a hand in her parents' untimely death. And the clues all lead to their alma mater...
Norma is a perfectly normal thirteen year old girl, thank you very much. She's good at keeping her head down and her chin up - at least, until she has a magical meltdown that almost kills a dozen people. So here she is, forced to attend wizard school "for her own safety." These weirdos think they can drag her down? We shall see...
Cass is the latest in a long line of magicians. Stage magicians. Cass did not read the fine print. Cass is about to have a very odd school year.
Jerusha is the latest scion of an old, rich wizard family. She talks the talks and walks the walks like all the popular girls... if only she could cast spells like them. In spite of her encyclopedic knowledge of theory, Jerusha's magic remains embarrassingly weak. Except in the one area she was told to never explore: necromancy.
Eve kind of just came out of the woods, which, compared to everyone else, makes her normal.
And Hester's going to recruit all of them to help her unravel the conspiracy of her parents' murder... assuming school doesn't kill them all first.