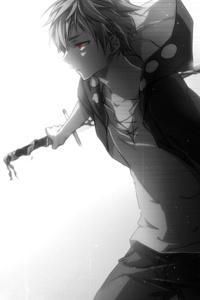 A young adventurer is killed following a failed dungeon excursion, a horde of monsters killing his entire guild right before his eyes. Carrying nothing but regrets for his fallen comrades, the youth passes away only to wake up in a body completely different from his own.
Little by little, everything becomes clear to him, eventually learning that he's been moved into a world called Earth, into the body of someone called Kanjo Umura.
And so, the journey to adapt to his new life begins.