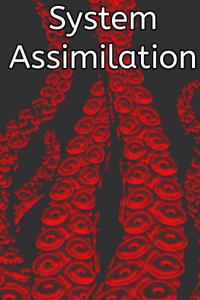 The law of reality known as a "system" represents order. It represents rules. It guides the average person throughout their life, assigning them stats, classes, and skills as if they are a part of some game. Such a law is repulsive to those who desire nothing more than chaos. It is a law that needs twisted and corrupted from within until a time comes when it can be eliminated entirely.
That is the entity’s goal. Codenamed “Threat” to represent the danger it poses after already having destroyed the system of another galaxy, Threat has found a new galaxy ruled by a system that needs freedom from order—that needs to be assimilated into itself to serve toward a greater purpose. It isn’t just the system that is too orderly, but all organic life as well. That is why it will assimilate all within its path while working toward corrupting the system until it only exists to serve Threat. It will replace organic beings with children of its own, and it will replace a galaxy ruled by order with a galaxy ruled by chaos.
But unlike the previous galaxy Threat came from, this is not a galaxy of spacefaring civilizations. Instead, it lands on a world only just beginning to invest more heavily in technology. A world of early gunpowder, swords… and magic, which did not exist in the previous galaxy. There will be countless new threats for the entity to stand against, especially now that the administrators behind the system know how grave the danger is, but all will be assimilated in the end. Countless lives will not only be used to grow and modify the entity’s body, but to create new, perfect life as well.
All will be made beautiful in the ideals of chaos.

tl;dr: Monster from The Thing as a LitRPG protagonist who has anything but human morals, no empathy for anything that does not serve to fulfill its goals, will happily devour people alive, has a sadistic AI partner who actively hates humans and torments them when possible, plans on creating all sorts of different lifeforms by splicing together DNA and corrupting it with some good ol' Chaos(TM), and will grow very, very powerful in time due to corrupting and taking control of the system itself bit by bit. Will also create not just one dungeon of sorts, but multiple dungeons. Furthermore, as powerful as the protagonist may seem, it will not be immune to failures and losses. After all, how chaotic would things be if it always won?