A Pirate's Life for Mei 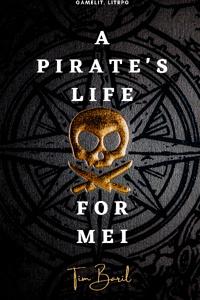 In the future, prisoners all over the world are no longer kept in traditional prisons. They're put into comas and permanently dwell within full-dive RPG worlds. Mei, convicted of political crimes, finds herself in chains aboard a ship in the Atlantic, a prison realm set in 1575, in the age of sail.
For the next 20 years, she's expected to perform hard labour in the brutal, pre-modern conditions of the American colonies and the Caribbean. She'll work cotton and sugar cane fields under the harsh sun, slave 'til her fingers bleed in mills and tanneries, and endure the lascivious supervision of guards with very little oversight and the freedom to use her in any way they want.
Except that Mei has absolutely no intention of going along with that. While most prisoners sullenly endure their hardship and time in a system stacked against them, Mei knows that, technically, this world is a game, and that one can buy their freedom — if they have the gold.
And this also happens to be the golden age of piracy. Yo ho, yo ho.
It's a pirate's life for Mei.