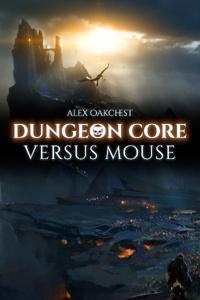 It’s the battle everyone is talking about....a dungeon core versus a mouse.
When Tyler’s parents kick him out, he does what every sixteen year old would do – he tries to find a mage who will teach him deadly magic. Too bad the mage sees something special in him.
Too Bad? How is that too bad?
Well, not long into his apprenticeship, Tyler is killed, turned into a dungeon core, and trapped inside a mountain. With his new dungeon powers, he can create monsters, mobs, and traps. And if he’s to have any chance of escaping the mountain, he’ll have to use them.
But an unlikely opponent wants to stop him…
White-Snout is the only mouse to ever learn abilities from the Spiritual Way. As impressive as this is, it earned him banishment from his nest.
Now he lives with a bunch of mountain rats who don’t treat him like one of their own. To prove himself, White dreams of becoming the first mouse to destroy a dungeon core. But is that even possible?
Whatever happens, the world is about to see a rivalry unlike any other.
With game-like leveling, cultivation, and monster/trap evolution, this is an unmissable dungeon core / LitRPG / cultivation trilogy. Join Tyler and White-Snout as they progress through the ranks of power and head toward an explosive showdown!