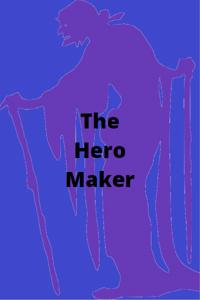 Said to be a spirit with neither name nor form, The Hero Maker is a wanderer of the cosmos, drifting along from one world to the next, it's drive and intent unknown. Though it usually passes by undetected, on occassion, an individual will catch this entity's eye and receive a unique gift. Though it is said that those touched by The Hero Maker are destined to greatness, noone knows whether their newfound talents will be used for good, evil, or even completely wasted by the receiver; only those who truly understand their gift, and truly understand themselves, will go down in history as heroes.
These are the stories of some of those heroes.

The Hero Maker is a compilation of origin stories, where the titular character only serves the role of kickstarting the plot. Most of these origin stories will be finished in one chapter, and the characters featured within those chapters will only rarely interact with the characters of subsequent chapters. Unless otherwise stated, you can treat different stories as occurring in entirely different worlds at entirely different times, and the rules of the magic system of one world don't necessarily apply on the next. Clues regarding the titular character may be interspersed in these stories.
The characters featured in The Hero Maker will most of the time be left on the drawing board, as it were; I may occasionally pick one of them up to write a separate novel about them, and I'm not opposed to other people doing the same with any character that strikes their fancy, but this is, in the end, just a pile of starting premises, not a novel in and of itself. If I'm aware of a story that was written about one of the characters, I'll mark it on the corresponding chapter's title for those who may be interested.