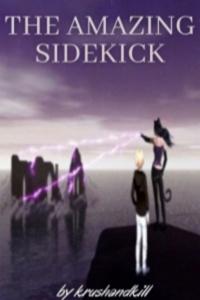 Jack Snyder died on Earth during a car accident. Time went by, and he heard a girl’s voice calling Nozomu Shinchaku. Jack slowly opened his eyes and an unknown girl was crying in front of him, but everything about her was wrong. Long blue hair, yellow eyes, cat ears instead of normal Human ears. Jack glanced at her hand and saw sharp and long fingernails caressing his face. A fluffy blue tail was trembling behind her, signalling her worries.
Jack saw a pool of blood on the ground near a rock, and he had a big bandage on his head. Strangely, his soul travelled to a young boy’s body, that judging by the pool of blood, died because of that rock.
Now, he has to learn how to live in a strange Magical World as the Human teenager Nozomu Shinchaku that strangely can’t use Magic, and Magic has no effect on him.
.
“Definition of sidekick: