No Tales For Dead Men 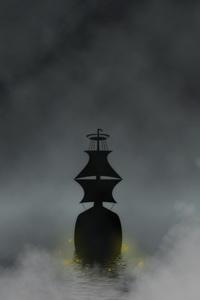 “Uh…!” A man in dangling rusty chains and rattling shackles asked, “Am I dead?”
There was loud sobbing mixed with louder cheering in the background.
“I don’t know, lad,” Replied another man with a stringy grey beard and quivering hands next to him. "The air reeks of it, though."
Crows were cawing, and necks were bowing.
The man gazed up at the falling sky. “Oh.”
“Do you want to hear a tale?” The elder softly urged.
“…. Aye.”
“It’s about a notorious pirate who bears a Scarlet Blade.”