No Fish No Life 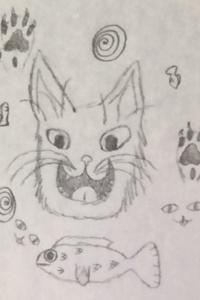 There was once a wizard called Howard. He did a lot of magic and got pretty good at it over the course of his long life. He used his magic to make his life nice and comfortable. Magical self-massaging chairs, magically-comfy couches, and best of all: magical air-conditioning. His fridge was always filled with fresh ingredients to cook, and his garden's magical plants grew all year long.
Oh yes. He had it all. His only regret in life was his failure to preserve his pet cat, Mittens, after it got run over by a space-shuttle. He was going to turn Mittens into an undead, but he accidentally lost the fluffy beast's soul. And now, Mittens is reincarnated somewhere else, as something else, and Howard probably won't ever see his companion again.
Of course, Mittens is a cat so it doesn't really care. All it wants is some fish.