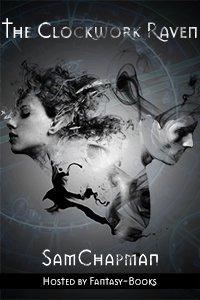 For ten years, Karla and Kio have known nothing but Nashido--the castle, floating thousands of feet above a vast ocean, that protects them with a combination of unreliable technology and unfathomable magic. One thing keeps them going: Raven, an ornithopter they’re patching together in the hope of one day reaching the surface. Both of them have promised that they’ll set out for land together, or not at all.

But then a skeletal winged beast attacks the castle without warning, and Kio discovers the magic that keeps the castle aloft is fading. And then another attack causes Karla to manifest a strange and supernatural power, forcing them both to figure out who they really are and how they arrived on Nashido. It's a quest that will reveal secrets they've kept from each other, even as they fight to keep the castle in the air long enough to escape.

The Clockwork Raven is an adventure story. There's danger and survival in a remote setting and two heroes who have to trust each other in order to survive. Everything they fight is stronger than them--combat takes time and has consequences. No leveling up, no overpowered weapons, just ingenuity and quick thinking in the face of fear.