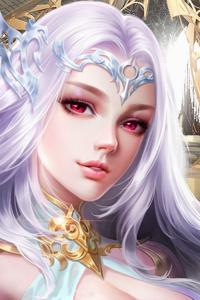 The main character of this story is Ise'lya se Hathor and the plot is told from her point of view. She is an Aelliri, a humanoid species with white, silver or golden hair and some shade of red eye color. The Aelliri can use psionic powers and are quite proficient with it. They live very long lives, as they can't die from old age. There is a huge difference between members of this species, as some are born as rulers and others are born as worker drones or soldier drones. A Aelliri ruler class like or MC Ise'lya se Hathor has very high mental capabilities and strong psionic powers. They also have a good physical development and are the elite of their society. A worker drone has an even more impressive physical development, but very low mental capabilities. Such a drone is much taller and well build then other members of its species with more intelectual classes. All Aelliri have a very strong sense to work for their community and they interact with each other not only through speach, but also psionically. The Aelliri did not evolve naturally, but were artificially created by another highly evolved species as soldiers for war to fight the enemy of their creators. The creators, which are called the Ancient Ones by the Aelliri, are not present in the galaxy anymore. In the great war, called "The Fall of Heaven", the Ancient Ones where nearly driven to extinction by the enemy and the surviving ones fled from the galaxy.
Ise'lya wakes up in a cryochamber, a long time has passed since the great war. The cryo sleep has left her with mild amnesia, which should subside over the next few days. There is only one problem, intruders have entered the installation in which her capsule is located. She has no time to remember and has to act now. How will she solve this problem?
Ise'lya plans to solve the current problem and bring the installation she is in back to its former glory. This is only the start, as she discovers what happened while she was in cryo sleep, which completely redefines her ambitions ...
If you like this story also check out my other fiction "How to raise a Hive Queen" here on Royal Road :D
The cover image consists of two images (person and background) that I found online. I have adjusted them via image editing, so that the cover image is suitable for the story. The person shown on the cover is Ise'lya se Hathor, the MC of this story. If the original artist of this picture wants me to remove this cover, he can contact me here and I will comply.