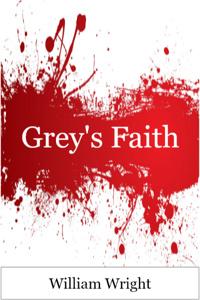 Set in an alternate Elizabethan Britain, the world of Grey's Faith is one based on historical events, but not held hostage by them. In this world, Angels appear to the faithful, and perform miracles. But those miracles must be paid for with sacrifice, and the price is always rising.
Meanwhile, other powers are reviled as witchcraft, their practitioners hunted and killed without mercy. The most feared of all are Blood Witches, their power is to use blood to push their body beyond its natural limits, heal mortal wounds and even lay curses on their victims.
Three orphans hiding magical powers are thrust from their dismal but sheltered life in an Elizabethan orphanage and into a secretive world of magic and intrigue. Conscripted as agents of the Crown, they must do their country's dirty work in exchange for their lives.
When their powers put them on either side of a magical war, where will their loyalties fall? How far will they go to keep one another safe?
Trigger Warning: This story contains graphic scenes of violence, poverty and misery. It features teenagers being put in harms way, being injured, and dying. It is also critical of organised religion and its impact on society, so be aware of that if it is something you might find upsetting.