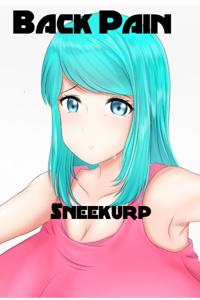 "Existence...is pain!"
Dwight Hock is a 35-year-old videogame addict who is about to start a new file on one of the world’s most popular video games: ULife, a revolutionary virtual-reality world where players can be anything that they dream of. People can change genders, the handicapped can walk again as towering bodybuilders, and furries can be the anthropomorphic animals that they’ve always wanted to be.
Dwight, a reclusive virgin who is obsessed with pornography and views women as nothing more than sex objects, naturally designs his new ULife character as a young woman with gargantuan, beachballl-sized breasts with the intention of fondling himself in game for his own pleasure. Upon entering the new world however, the perverted man finds a few things out of place: for one, he can smell, taste, and feel everything in the game as if it were real, and on top of that- he can feel the weight of the enormous breasts that he gave his female character!
Dwight soon comes to find out that the world of ULife has seemingly become reality, and that he is now stuck firmly in a body that has boobs that weigh almost 80 pounds apiece! Struggling to survive in this bizarre new realm that is populated by even stranger characters, Dwight desperately looks to escape as his perverted dream quickly turns into a nightmare.