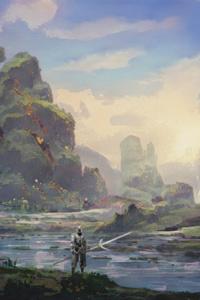 The Earth of the future is united under a single government, but not all things are well. The shape of the playing field may be changed, but the powerful still rule the weak.And those who do not conform with the rest of society are exiled to another world. A world that not even the technology of the future managed to tame.It should have been humanity's New World but ended up as nothing more than a penal colony. A place where the exiled are sent to die.
Motivated by revenge, Magnus sets out on a quest to bring his own justice to his enemies. For that purpose, he is willing to go further than most others.But then he learns that if he truly wishes to change things, he can only find his answers beyond the gate.
Having lived most of her life as an exile, Astra is a woman of few interests aside from survival and climbing the ranks of her clan.To achieve those goals, she certainly won't be squeamish when a chance to achieve those goals literally falls into her lap, or will she?
———————————————————————————————
I am trying to go with a survival/medieval setting in this one. People from a technologically advanced society are thrown into a world where they can't maintain their tech. They are forced to rely on medieval technology where they have to make do with the limited resources they have and what little of their old technology is still working. Their gene manipulation allows them to have something akin to superpowers, but that doesn't help much against the monsters of their new world. Not sure yet whether sufficiently advanced technology will be discovered later on to count as magic.
———————————————————————————————
Author's Comment:
I was asked about reading my work on other sites. The answer is simple: Currently, I am not active in any other networks than royalroadl.com. Only here, I correct mistakes and errors. If you read it anywhere else and have to pay for it or have to deal with an annoying amount of advertisement, You Are Being Betrayed. You would do good if you make other people in that network aware of it. This is a free project of mine for the purpose of having fun. And if people try to make money with it you shouldn't bother visiting their website. The only one whom I actually allowed to have my work on his website is Armaell who invested the time to compile them into pdf. (http://armaell-library.net/author/andur)