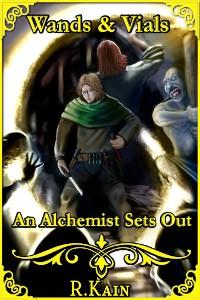 Set in a fantasy world known as Trimagus, Alchemy is a dying art and Magic-capable humans are becoming increasiningly rarer as time goes on. For the young Alchemist named Kowler Freslight, these were simply facts of the world that didn't concern him. He had a busier life with managing his own apothecary after being forced to withdraw from the prestigous magical academy he'd spent years attending prior.
However, that changes when he finds out how deeply the events are tied into the fate of the love of his life, a witch named Alice Pyralis. Given only a few years of time to work with, while managing a shop, he and his elemental wind spirit, Aeria, must seek out the legendary artifacts that once belonged to the greatest alchemist of all time, Paracelsus, in an attempt to save her from an early death.