Bringing a gun to the murim 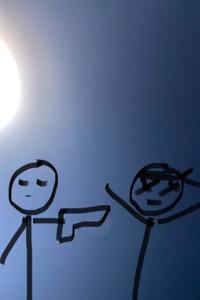 As part of the modern generation, I cannot live without technology. I’m not ashamed to admit I have a huge addiction and dependence, and am constantly influenced and manipulated through digital items. And so what? In present society everyone’s hooked on something, and I happen to be dependant on my phone. Whether it be gacha games, 123movies, kissanime or whatever, my phone was a portal that allowed me to peruse said dimension.

That was until truck-kun brought me to a literal dimension. And was it a futuristic cyberpunk one? Or one with magic and swords? Or giant mechs that battles each other?

Truck-kun brought me to my worst nightmare. One absent of technology, barren with modern ethics and interaction. Probably the most lawless and dangerous world too.

Truck-kun’s brought me to the god-damned murim.
Do I understand the language? NO. Do I understand how to cultivate? NO. Do I have any forbidden techniques? NO. Do I get the female lead? You guessed it, NO.
This is the story of me, a non-martial arts practitioner surviving in the murim by avoiding cliches (and women.), instead embracing the misunderstandings that occur along the way.

Oh and did I mention I have a gun?