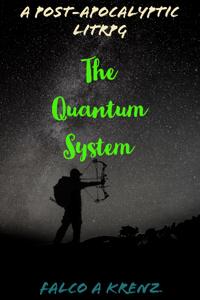 An anomalous experiment at ITER releases quantum fluctuation energy, leading to the discovery of humanity by the greater galactic community. In order to preserve humanity and surrounding civilisations planet Earth is initiated into the Quantum System, applied protocoll: Games.
Waking up after being initiated during a hunt for a dangerous predator Ryan realises that most of his family is gone and in order to rescue them he will need to progress to the end of the Games.
The System will change him irreversibly and Ryan may well leave his humanity behind to succeed.
Ryan is determined to level up and become strong quickly enough to avert the dire fate of his loved ones, a journey that will prove hard on his own. Gathering like-minded companions will probably be the key to surmounting the challenges before them.
Will they succeed and on whose corpses are they are willing to tread on to achieve their goals. Their own, if need be?