Gunslinger of the Multiverse 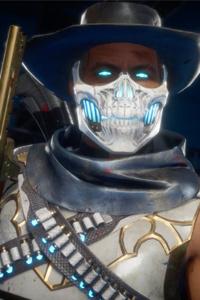 Erron Black, from rebel boy to texas most feared gunslinger. Then for hundreds of years old mercenary and for guarding the Khans of Outworld, you could say he was on top of the world.
But that Cowboy didn't stop, it wasn't his style, and his ambition was too big to just stand by and play handsome for Khan, he always wants something more than he has and loves to suffer to get what he wants.
So he challenged a titan, a creature more powerful than the Elder Gods, and against all odds, he won.
Now he's on top of the world, and possibly the galaxy, but an immortal being gets bored fast, time to expand the horizons.