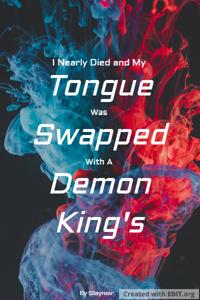 Like most stories, they tend to start on a average day. No one really plans on having a near death experience, let alone being told your tongue is now that of a Demon King's by the mentioned freak accident. In the case of the quiet thirty year something old man called Yowamushi Kingu, that's just his luck. All he wanted to do is live a average typical life as a baker and work for the local supermarket as a regular employee. Fate seems to have found a funny way to make his life a literal hell however.Now faced with a power no one could've or would've ever asked for, Yowamushi is subjugated to the demands and whims of Gehenna and is torn between the duties of a Demon King day and night. Able to see all kinds of strange phenomenon now due to his unusual circumstance, he becomes a magnet for attracting unsavory fiends for their own ploys as well as those seeking to destroy him for his obtained power could potentially become a threat to humanity. So much for making cookies.