The Legacy of Athena and Hermes: The Sea of Monsters 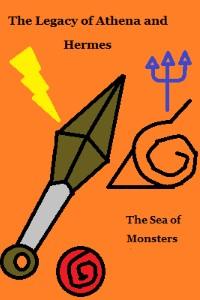 The Second Story
Naruto's whole school year been anything but peaceful. Instead he been fighting monsters during his time off. But now things turns for the worse when he finds out Thalia's tree was poisoned, and Grover being kidnapped. Chiron been blamed for Thalia's tree and been replaced with the infamous child-eater Tantalus that obviously wants people to suffer even if it means the safest place for demigods be destroyed. Now Naruto has to keep his best friend Percy protected, which would be hard since he been send on the quest for the Golden Fleece with the Daughter Ares: Clarisse whose dad wants him dead, and an old friend from the Elemental Nations who came across dimensions to see him.
A Crossover between Percy Jackson and Naruto series, which I do not own the right to.
It's also based off SoulReaper's Son of the Huntress series which I ot perission to use for inspiration of this story