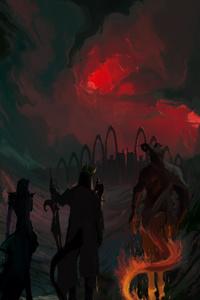 A LitRPG and Epic Fantasy adventure:
The son of a mafia boss finds himself drawn into another world where he must find a way to survive the horrors of Oblivion, make pacts with demons, form unnatural friendships and figure out what the hell is going on while dealing with the depressing reality of his past.
An artificial intelligence has ascended into godhood and thrown Earth into chaos, pulling millions of people into a new grouping of worlds unlike anything Trey has ever seen before. To his knowledge, he is locked into the Beta for what the system prompts call a ‘Death Game.’ Here, artificial reality is manufactured for the enjoyment of the divine and he has a very real chance of truly dying. Just how real is this place though? Is it truly just a simulation? Is it actually just a realistic game of life and death… or is it something much more?
Elves, dwarves, undead and other races only thought to exist in fairy tales are now a reality. Black magics, paragons of gods at odds with one another, predatory symbiotes and an unholy calling he doesn’t quite grasp the significance of are all ensnared with his pressing fate.