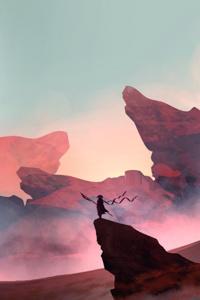 Reality turns Legend. Legend turns Myth. And Myth vanishes over time. But not these Myths. Not this Legends. Not this Reality. No. These are stories that everyone knows. Storys sang time and time again. Tales of magic powerful enough to rival whole kingdoms. And the people that wield that magic. Everyone knows them. The tale of Velacinir, the Great. The song of Alek, the Skilful. The Legend of Waner, the Lost Smith. The Myth of Kaveli, the Unifier.
All people know these things. These Storys, Legends, Myths, Tales, Songs. And mostly everyone thinks they never happened.
But they did. And I was part of them. All of them.
I was there. I might not have been the one to kill the dragon. The one that found the skill of resurrection. The one that fought whole armies for their family. I might have not been those people but I was there. Because although I may have not done those things, the people that did it weren't created from night to day. They did not just appear. They were taught like everyone else. They were just better at the things that people taught them. That I taught them.
Yes. I am not the one that songs are being written about. I may not be the one whose legends perdures even until today. But one thing I am. I am their teacher, their instructor. I am the one that made them what they became. I am... Who am I? I had many names through the ages, but there was one that stuck to me the most.
I am the Maker of Power.
But like the ones that I thought. I was also a normal person before everything that happened.
And this is how it all happened. This is MY Story. MY Legend. MY Myth. MY Song and MY Tale.
This is MY beginning.

And YOU SHALL LEARN IT.

The book cover is not mine, the creator is yet to go public with his creations, but has allowed me to display this one.
No release schedule although I want to post 1 chap per day for the first week, and then we will see.