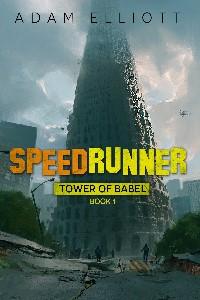 Launch day.
That was what they called it. The day when over four million people vanished in an instant from the island of Manhattan. The day earthquakes ravaged the east coast. The day a one hundred and one kilometer tall tower rose from the wreckage of the now empty city. The day every screen, newspaper, and smart phone displayed a single message from an unknown source:
The Great Emperor has issued his challenge.
From the ruins of the Old World rise the Tower. Its doors will soon open, and the great game will begin.
A hundred floors and a hundred challenges await the worthy.
And to the victor? A Wish of Unlimited Power.
Cayden Caros yearned to play that game. His only problem? The Terms and Conditions. A strict set of rules that, among other things, prevented anyone under the age of sixteen from entering the tower.
Forced to wait for over two years, Cayden did the only thing he could do to pass the time. He researched, he practiced and he prepared. It would take a lot to catch up to players with such an enormous head start. Lucky for him, he was a special type of gamer.
A SpeedRunner

So.... It has been a hot minute.
I don't like talking about my personal life, but suffice to say I had some fairly bad times for the last couple of years and have only just recently pulled myself back to good health, physically and mentally. I have a very supportive partner, and am put together enough that I want to get back to doing what I love. Writing nerd fiction that I am too embarassed to try to explain when people inevitably ask what my books are about.
Still beats when I used to write erotica.
Story updates for book 3 should be on a daily schedule, baring unforseen circumstances.
The majority of chapters from books one and two have been pulled down to keep with amazon's KU rules.
Book one is found here.
Book two is found here.
Both should be on a free deal starting Tuesday the 6th, so don't spend your money on me unless you feel generous.
If you like the story, please comment or favorite. Each comment goes a long way towards pushing visibility for the story, which means more people get to see it and I feel slightly more validated as a writer.