I couldn't join a guild, so I beccame a Freelance Mage instead. 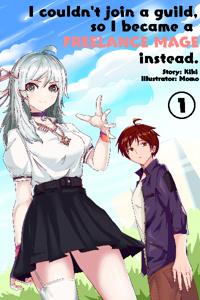 Key Witts wanted to become a world class Mage. Fighting for his life, his lover, and his friends, he dreamt of joining a top class Magic Guild and earning his fame and fortune—with maybe a few stories and songs written about him along the way.
…So why has it been two years of failure with a third looming overhead?
Fame? More like Notoriety. Money? He’s totally broke.
Perhaps becoming an adventurer wasn’t all he’d hyped it up to be after all.
He’s not noble, strong, or popular—
But at least his story has cute girls.
Join Key as he learns about magic, swordsmanship, farming, and kicking balls.
Story features art done by Momo.
Story will release the first five-or-so chapters day by day, then switch to a Wednesday and Friday release schedule.