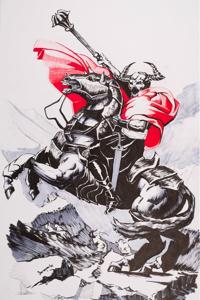 Sometimes, it's hard to tell between a man and a demon. Not so for Napoleon Bonaparte. 100% demon, that one. Conquerer of nations and enslaver of races, the Demon Lord, as he has come to be known, is feared by all the peoples of Europa. Feared, but also loathed. Thrice, the nations of the continent have risen up in defiance of tyranny, and thrice, they have been trampled beneath the boots, bullets, and cannone of Napoleon's Grande Armée. Desperate, a princess of Austria falls back on ancient magics, summoning a Hero from another land. Only, the hero they get is... Well, let's just say Samantha is just looking for a good time. And a romp through a fantasy version of Napoleonic times sounds like exactly her cup of tea.It will fall to Samantha to create alliances, raise armies, hunt monsters, and deal with the romantic advances of power-hungry princes, and maybe even some princesses. But no matter the obstacles, she is determined to have her grand adventure, come hell or high water.