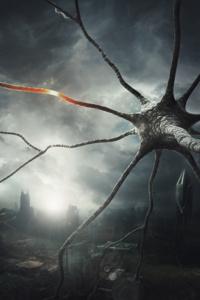 A night of heavy drinking ends poorly for Ryan when he finds himself waking up in an unfamiliar home the following morning. He has no memory of how he got here, his phone his been rendered inoperable, and to top it off, the seemingly unassuming neighborhood is revealed to harbor horrific creatures that should have no business existing in reality.
Creatures he’s left with no choice but to face head-on. Ryan’s survival will depend on his ability to overcome his fears, adapt to his new environment, and grow in power to stay ahead of the rising curve. Along the way, he’ll make allies, clash with enemies—both monsters and human alike—and perhaps even begin to uncover the mysteries of this world and how he came to be here.