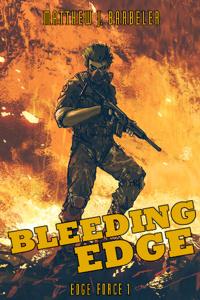 JD Rideout is a washed-up writer with the best years of his career behind him. His kids are the only thing keeping him going, and he only has them half the time.
When JD wakes up on a tropical island in the middle of the Whitsunday Islands, chained to the ceiling, he knows something is very wrong. He feels like a character in one of his novels.
He soon finds out that he’s been chosen to fight for the fate of the world as part of EDGE Force, an elite force tasked with fighting back against all kinds of threats to our reality. Those who fight for EDGE Force gain access to the ability to level up and gain powerful abilities to help them fight against threats to our reality.
JD is given a pistol and an axe, along with a new callsign: Hatchet.
As Hatchet, he’s tasked with fighting back against a shadowy cult that has reappeared after 15 years. But fighting the cult isn’t the only thing that drives Hatchet forward. These cultists use the essence of an Old God to reshape reality into whatever their imaginations can bring forth.
Uprooted and forced to fight for the fate of the world, Hatchet is the planet Earth’s last line of defence.