Against The gods and demons 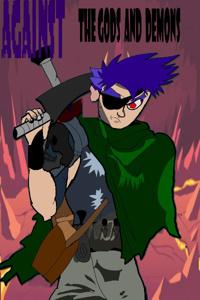 Can a mere mortal defeat the gods?
Gods have taken away something important from Roy's life. He's now out for revenge. Now marked for death by the gods, Roy becomes condemned to a fate in which he is relentlessly pursued by demonic beings.
Join the adventure of Roy where he walks the path of hell filled with various kind of demonic and unimaginable horrific beings to defeat the gods.
It's both uplifting and epic, like he's ready to take on the legions of hell. Yet it's also sinister and evil, as if this is the destiny of man, to struggle against forces beyond our control.
Meanwhile, someone in another country gains access to divine knowledge and prophetic vision. Using the newly gained nigh-omniscience, he starts taking actions to change the terrible situation of this dystopian world, freeing humanity from the age of darkness.
Story setting: Medieval, multiple protagonists. I have also posted it on Tapas. Check the synopsis there where I said I'll be posting here as well. https://tapas.io/series/Against-the-gods-and-demons/info