Why are there so many protagonists? 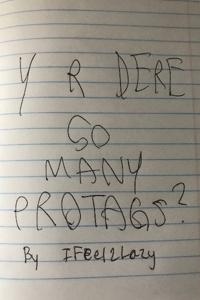 Hao Ren thought he was the Son of Destiny as he caught up with the trend of transmigraters/reincarnaters from Earth. Heck, he even had the standard configuration for a transmigrater...a system. So he had a salted fish mentality (lazy) while completing the system tasks thinking that as a noble protagonist he could get stronger while lying down and picking up treasures from left to right. However, he slowly realized something was wrong from the moment he decided to start the system's tasks that he had been delaying for several years of accepting disciples and starting a school.
One student kept touching the decrepit ring on his finger while seemingly muttering to himself.
Another student shouted, "30 years in the east and 30 years in the west, don't bully me just because I'm poor now!"
In another corner, a student raised his head to the high heavens and looked at others through their nostrils as if they were an aloof immortal.
At night while everyone else was asleep, a certain student secretly took out a tattered ancient book from under his bed.
Meanwhile, a country side student glanced at the so called "Sky Level" martial arts from a certain sect and wonder why it was weaker than what his uncle next door taught him.
Hao Ren: Something seems to be wrong here!
[If you have never read asian cultivation novels (xianxia/xuanhuan/wuxia/gaowu) you might not understand what is going on]
*Note: Sorry for the title page. I was merely true to my name. xD