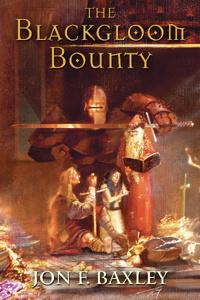 In the dark days before the end of the first millennium, Scotland (or Scotia as some called it) was a leaderless hodgepodge of tribes, clans and warring factions all bent on the same thing--domination of the land. Wizards, sorcerers and magicians still plied their trade, though much of their power had given way to the machinations of men and their war machines. To the south of Scotia lay the realm of the Saxons ruled by Ethelred the Unready and his ruthless minions. To the west, Ireland had just come of age. Everywhere else the constant threat of a lightning swift Viking incursion loomed over the land.Growing up in this lawless world is a displaced Daynin McKinnon, heir to an ancient familial keep on the island of Rhum. He and his grandfather Ean scratch out a living amongst the Saxons, careful never to divulge their clan heritage. That all changes when Kruzurk Makshare chooses Daynin as the ideal prospect to help him bring down a vile sorcerer named The Seed of Cerberus, ferreted away in his impregnable fortress at Blackgloom. Little does Kruzurk know that in so doing, he will launch young Daynin, himself and others on a vast, dangerous quest that no one could have foreseen.
*One Hollywood producer has dubbed this three book fantasy epic from Jon Baxley as, "BRAVEHEART meets THE LORD OF THE RINGS." Real places, people and events flesh out this fast moving, multi-faceted semi-historical series but fear not fantasy readers. There's more than enough of the magical, mystical mayhem you have come to expect from great fantasy. Romance readers, too, will enjoy the 'spice' in these characters--and there are a lot of them--both human and otherwise. And if you're into Viking lore, this series certainly is for you.When someone asks the author about his series, he answers with, “There were far more surprises in this tale than I ever expected and it's not over yet! This volume and the next two contain hundreds of pages filled with rollicking good times, fast moving action and a page turning adventure you will not soon forget."Books In The Scythian Stone Saga:THE BLACKGLOOM BOUNTY Episode 1 - 500 pagesTHE REGENTS OF RHUM Episode 2 - 800 pagesTHE SCIONS OF SCOTIA Episode 3 - 800 pages