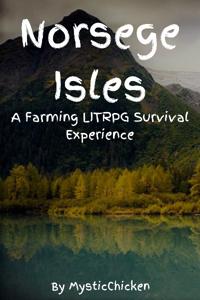 The world is gone. Mother nature has been taken advantage of one too many times and now she's fighting back. Rather than trying to heal their broken planet, humanity decides to take a more fantastical route.
Enter Eden, the virtual world that promises lifetimes of adventure along with a land size that claims to be infinite. For the entire human race, it has to live up to its biblical name.
Ambrose, a young man drawn to the promise of Eden, says his farewells to his parents before uploading his consciousness into the virtual world. But Ambrose doesn't want to be the king's knight or spell-slinging mage. No. Ambrose wants to farm. Picking his skillset around living off the land, Ambrose enters the Norsege Isles with dreams of enjoying the world for what it used to be.
Dangerous creatures lurk in the woods of the Isles, fearsome beasts that'll rip any human or Norseman to shreds if given the chance. Ambrose will have to learn how to tame the Isles' animals if he wants to have a hope of living his dream as a farmer of unexplored wilderness. He'll also have to deal with any pesky people that decide that he's easy pickings.
Will Ambrose make it long enough to harvest his first crops, or will the pressure become too much to bear? Join Ambrose as he strives to live his life in the new world.