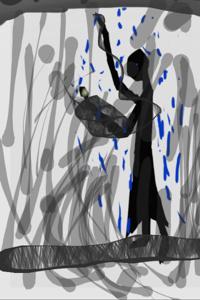 You called me here. I have heard your request, and my demand is simple.
Continue where I cannot.
It would be best if I told you a little tale.

Once upon a time, the sun was taken away by an exhausted fool.
Lightning crashed down from the clouds, waves flooding the coastline as the dead rose from the shattered earth. 'They' were infuriated at the arrogance of their former puppet on strings. A hunt began as the pantheon scoured the earth, bringing ruin and destruction to all those in their path. The thief was forced to reveal his location, and the hounds pursued.
When the time was right, a large dome of ink-black enveloped the entire area. Days turned to months, and months turned to years. No one knew how many people fell inside. Clueless to how painful each moment was. Finally. Finally... the task was over.
From the shattered dome, emerged the single immortal who had survived the battle. Many of his allies fell in order to assure one fact. There will be no such things called gods. No more cruel fates, unbeholden to 'Their' twisted malice.
Now, while sitting on the side of the road. I see a world... fractured. Listless. I cannot stand, but with what I have left, I wish for someone to take up my torch.
I cannot move. Tis a pity. If you wish to possess my power, Find the grave of red and black flowers. It's not that far away and trust me, you'll be able to tell which one it is. Dig up my grave and release my soul from its prison.
You can have what's left. So... do we have a deal?
Good.
Wake up, kid.
It's showtime.