Boosted Restart – A new chance in a different world 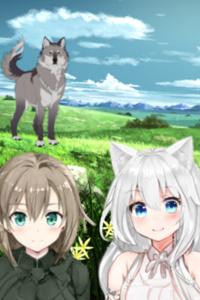 Sophia wasn't happy with her life. Due to some wrong decisions, she'd become really shy and introverted, to the point it hinders her from having basic interactions or even conversations. Not being able to talk with women at all, the only gender she's interested in, caused her to feel really lonely.
The girl wanted to change, but she got too stuck in her ways. After all this time, Sophia had become unable to do so without help.
One day, while she was busy complaining about her situation, she accidentally missed a red traffic light. This accident led to the end of the life she hated so much.
However, she was saved from certain death by a mysterious being. He called himself an overseer of the worlds and gave her a second chance in a different world where even magic exists. He also granted her some boosts to make her life easier. Hoping to finally change herself, Sophia asked him to make her more outgoing, sociable, confident, and the likes.
The overseer didn't just stop there. He boosted every single attribute of the girl. Every emotion and personality trait got altered, be it a positive or negative feeling. Her physical stats were no exception. This caused her to have the most literal identity crisis because she felt like someone else entirely. To make things worse, those emotional boosts aren't the most reliable ones, overcompensating or even failing from time to time.
Trying to deal with these conflicting emotions, Sophia works hard to come to terms with the new her while doing her best in the new world. Exploring places, learning magic, finally finding friends again, and possibly more.
Unfortunately, she learns this world's magic from a highly overpowered, easygoing, and somewhat unreliable teacher. This not only destroys the last bit of her common sense, but Sophia's application of magic also becomes rather sloppy, causing one weird incident after another. Not to mention that some of the inhabitants of her new home are a little different from what she imagined. An easy life still seemed impossible for Sophia, but for all the different reasons.
----------------------Info:The cover is mostly made with WaifuLabs and some editing. The characters are more of an 'as close as I get them' approach for now.
Also available on ScribbleHub (Posted there first):
https://www.scribblehub.com/series/276881/boosted-restart--a-new-chance-in-a-different-world/
Tags used there:
Genre
Adventure, Comedy, Fantasy, Girls Love, Isekai, Romance, Slice of Life
Tags
Age Regression, Alternate World, Animal Characteristics, Appearance Changes, Appearance Different from Actual Age, Beast Companions, Beastkin, Carefree Protagonist, Demi-Humans, Dense Protagonist, Easy Going Life, Fantasy World, Female Protagonist, Identity Crisis, Lack of Common Sense, Magic, Misunderstandings, Modern Knowledge, Overpowered Protagonist, Personality Changes, Second Chance, Transmigration, Transported into Another World, World Travel
GenreTags