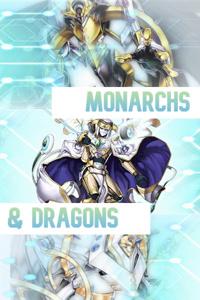 In the year 1999 a global catastrophe occurred: the arrival of the dragons. The destruction caused by the dragons left the world in shambles. Guns, chemicals, nukes; no weapons known to man could harm the beasts. But humanity would see its chance to fight back when the Monarchs stepped down from the heavens. The Monarchs had the ability of giving humans the powers they needed to fight. Knights, those bound to a Monarch, had to fight to defend humanity's last strongholds.
But life carried on and soon a new world order was established. With the interests of keeping these Knights alive, fighting and organised corporations stepped in to serve the Monarchs and manage the Knights which in the end turned them into private defence agencies (DPAs). The Knight status became that o f heroes, soldiers and commercialized idols.