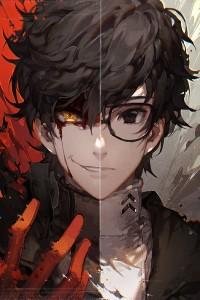 Power is a tool.
The only tool that people will fight, love and betray for. A tool that controls even the strongest-willed of people and make people commit the darkest of sins for.
But our protaganist was not powerful.
In a world destined for the powerful to rule over the powerless, our protaganist resorts to a life of mastering video games and reading books in order to escape from this harsh reality.
One day, when he has given up all hope in his life, he re-awakens to find himself in the body of a young noble in a world all too familiar. Imprisoned within the deepest confines of a castle ruled by a demon lord, he is surrounded by enemies on all sides. It had already seemed as if his new life had stacked all the odds against him.
But in that very moment, he chose not to be powerless anymore. He vowed he would struggle with all of his might to attain as much power as he could. He promised he would save this world from all of the injustices it held and enact vengeance on those who would oppose him.
Because yes, I had decided.
I will crush this world with my own hands.