Want Me, Love Me 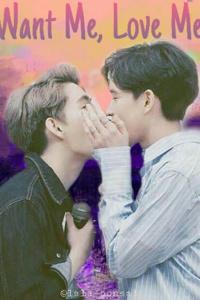 Keine Jang is a spoiled brat who hates men. A lot of men admire and like him because of his pretty face and girly appearance. He is not gay nor bi, but he likes the idea of everyone fighting over him. He wants the spotlight only to him and him alone.
He is beautiful. He is pretty. He is gorgeous. He is smart. He is rich. He has everything that everyone wants!
So why does he keep thinking of someone who stole a kiss on him especially the spotlight that is suppose to be only for him?!
He should be thinking of how he can get richer instead of stalking Cohenne Coleman.
But why is he doing this?
So he can see him? Hell! It should be the other way around.
To touch him? Bítch! He hates skinship.
To be friends with him? Nah-uh, he's not friendly.
So Cohenne will like him? Shit! He's straight, and there's no reason for him to want Cohenne's feelings.
Everything that he's doing is the opposite of what Keine Jang should do. And thinking about Cohenne Coleman is not good for his health.
He's not gay or bi, and he hates men like Cohenne. But can he stop his heart for beating so loud every time Cohenne is near?
A romance between the indenial, narcissist sunbae and the flirt-cheeky hoobae.