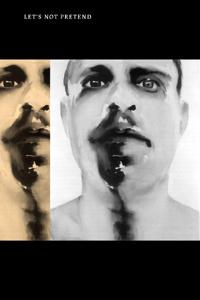 Marvin Morgonti and Alexander Abramowitz have known each other since they were teenagers. They innately know each other’s temperaments, niche interests, the gory details of one another’s messy upbringing. One of them can figure what the other is feeling with the smallest inflection and will know how to shake them out of the doldrums. Despite many people coming and going in their lives, they are the only ones who really know each other best.

They also know the best way how to hurt one another.

The cracks in their relationship begin with a conflict rooted in mundanity - competing for a girl who stands out from her peers come junior year of high school. But when the attempts to undermine one another forgo routine nastiness and veer straight into psychological warfare, the relationship repairs itself over the years the same way a shattered vase would - never quite fitting the same way again, painful to touch and visibly broken on the outside.

Entering their thirties, LET’S NOT PRETEND focuses on the perspectives of three - Marvin, Alex and the catalyst of their disintegrating relationship, Parker McIntyre - as they navigate adulthood with scarring memories, past resentments and a fractured sense of self.
Artwork credit to Santiago Ydañez