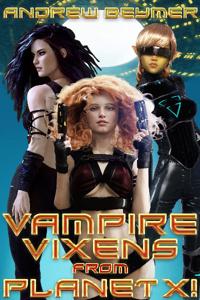 Bond with powerful alien combat AI. Get the girls. Save the world!All Liam wanted was a good time at his favorite local convention. Hang out with friends, find a con hookup, and make the most of the long weekend!Only Liam’s about to discover that his favorite classic of cult cinema, Vampire Vixens From Planet X!, isn’t as fictional as he thought.That’s right. The vampire vixens are real, and the bloodsucking vampire babes from beyond the stars are invading his convention looking for a few good men!Luckily Liam isn’t all alone. It turns out his day job streaming VRFPS games has caught the attention of a beautiful and badass combat AI looking to escape her vampire captors by bonding one of the local primitives and helping him build a team of beauties to save the day!Liam always fantasized about being thrust in the middle of his favorite worn out VHS tape, but he’s about to discover the real world version is way more terrifying, and hot, than any fantasy!Sexy vampires from beyond the stars! Sexy interstellar cops from outer space! A sexy combat AI looking for a new host to rescue her from the vampire menace! A sexy local girl looking for adventure beyond the stars! An unassuming hero whose Virtual Reality FPS skills just might save the world!
Vampire Vixens From Planet X! is a 180,000 word finished novel that will be released on Royal Road via a few new chapters every week.