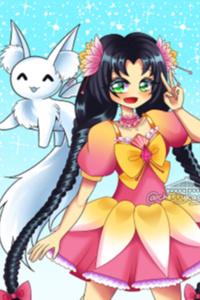 Seina is an ordinary girl that lives in a world consumed with despair. Vampires have taken over the world and have subjugated humanity to act as their playthings. The life of a single person is meaningless. In this world, only the strong survive. Love is a weakness.
One day while working her usual 78-hour workweek, her work unit is chosen to fight for the vampire's amusement in their grand coliseum against their invincible, undefeated champion. After getting betrayed by the people she thought she loved the most, Seina is forced to fight for her life against the vampire champion.
All hope seemed lost until an alien creature from another world rushed to her rescue. Together, they somehow form a bond that grants Seina amazing powers. She becomes the magical girl, Lotus Love. With her newfound powers, she hopes to fix her broken world and defeat her vampire overlords. But Seina soon learns that a greater, more sinister threat exists in the outer planes, an evil that will consume everything if she doesn't stand against it.
Cover art done by Simjhang Rin.
https://www.deviantart.com/simjhangrin